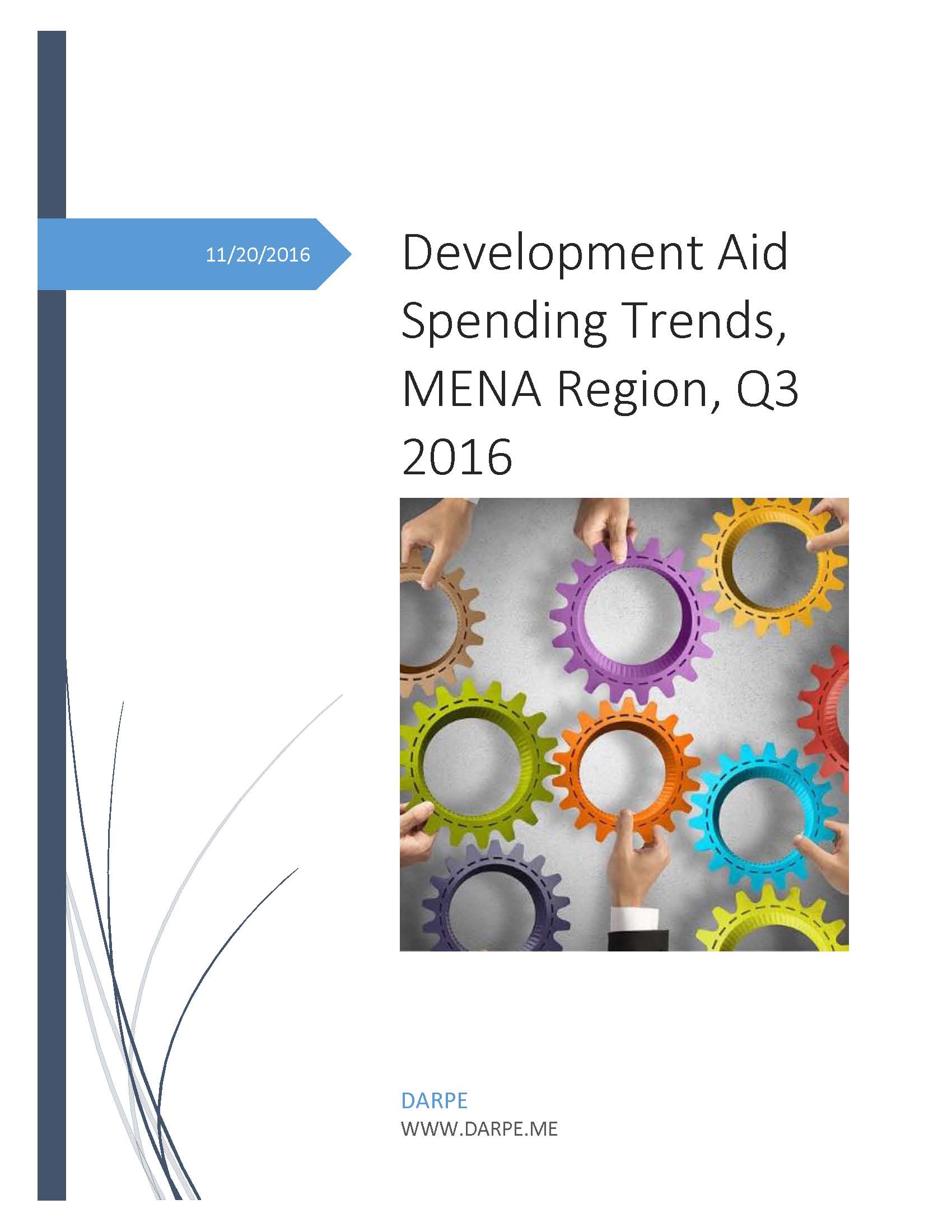 During the third quarter of 2016 (1st July- 30th September, 2016 ) the DARPE team managed to track over 350 tenders and grants across the entire Middle East and North Africa, posted by 60+ donor agencies, across the whole funding landscape including bi-lateral and multilateral donor agencies; international development banks; embassies; Arab banks and International Implementing Foundations. During Q3 2016, the majority of funds have been mainly allocated by UNDP in most of the MENA countries towards professional services contracts, particularly consultancies for various development projects

Although grants have featured less than contracts of professional services during Q3 of 2016, especially by multilateral organizations such as the United Nations and the European Union, a few noteworthy grant programs have been funded by bilateral entities, such as USAID as well as the US Department of State, among which the USD $1,300,000 grant to promote labor rights in the Gulf region. Of the 45 grants funded in Q3, over 75% have had a regional scope, focusing on two or more developing countries in the MENA region. 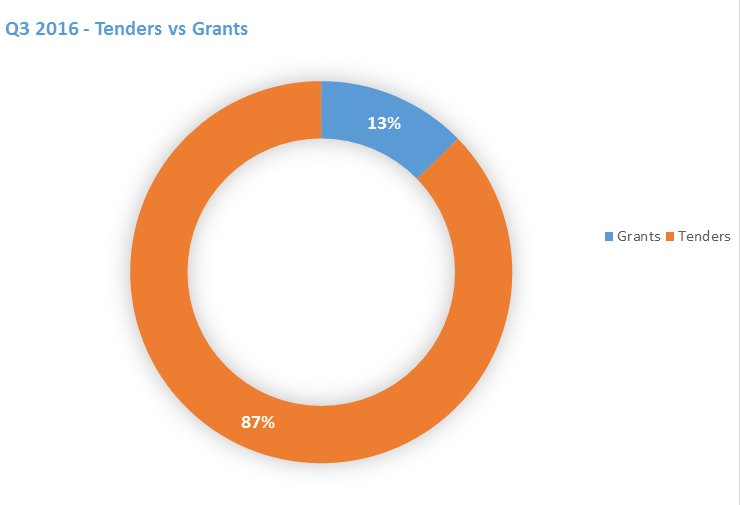 During the months of July-September, bilateral and multilateral donors agencies have been the major source for funding opportunities, followed by Development Banks and International Implementing Foundations. 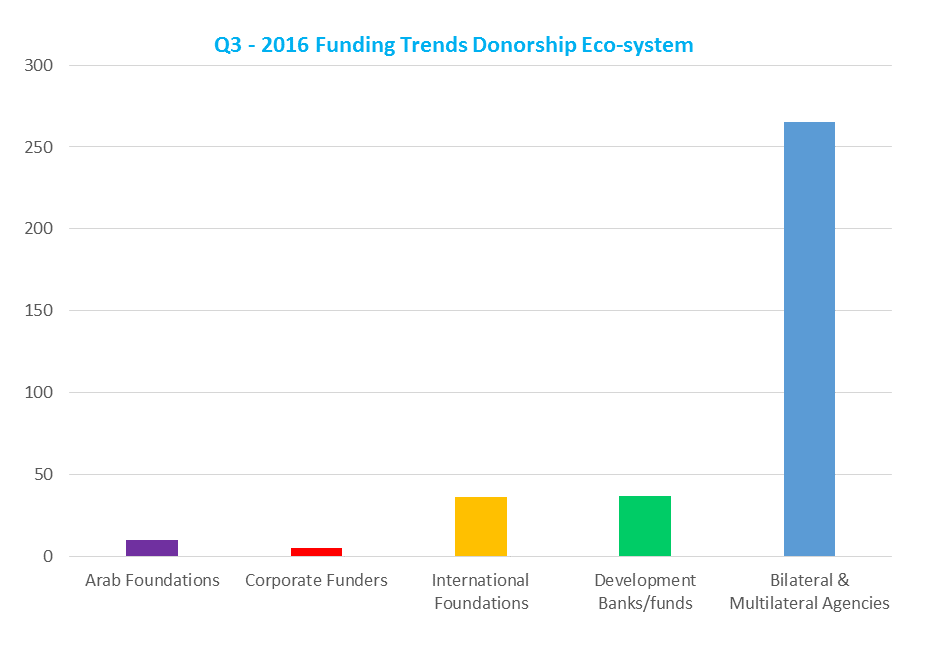 In contrast to bilateral donor agencies acting as the primary sources for grants, multilateral organizations are actively seeking to engage the private sector either as an implementing contractor or as a beneficiary. The later involves building the organizational and technical capacities of the private sector as a main objective of development projects. Notably, the DARPE Tracker team has witnessed through the observation of daily tenders, a clear focus by organizations such as the United Nations, and its multiple agencies, as well as European organizations such as EuropeAid, on recruiting individual consultants or consulting firms to provide M&E advisory services to ensure the sustainability of their programs.

Here below we will have a closer look at how donors directed their resources, and which sectors received the most funds across MENA for Q3 of 2016 (Jul-Sep) as evidenced by the number of the publication of requests for proposals or requests for grants. The analysis focused on Egypt, Jordan, Lebanon, Morocco and Tunisia as well as on the MENA region for regional-nature projects. Such indicative analysis will not only support Development Implementing Partners of Private Businesses and not-for-profit entities to understand where development Aid money is allocated but as well who are the most active potential client(s) to focus one. Sectoral distribution informs development implementing partners of where they may need to focus on in terms of demanded practice areas, technical and development themes.

In terms of funding priorities and sectorial distribution, the evidence shows an increased interest in the development of democracy & governance, which constitutes the central focus in Lebanon, Jordan, Tunisia as well as MENA (in regards to regional projects). In Egypt and Morocco on the other hand, the majority of projects have concentrated around the empowerment of women, the improvement of environmental problems, as well as the enhancement of economic prospects amongst the country’s poorest and most under-privileged sections of the population. 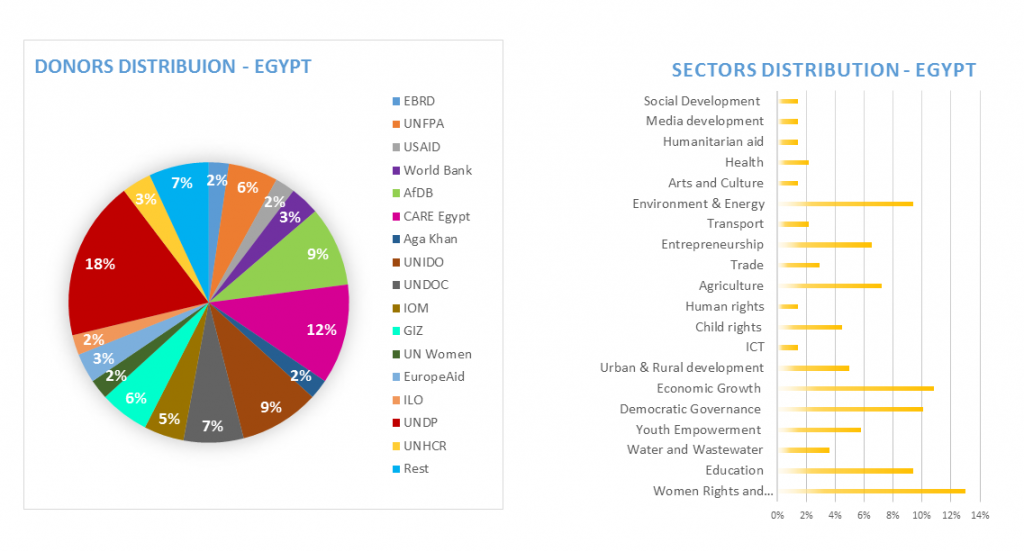 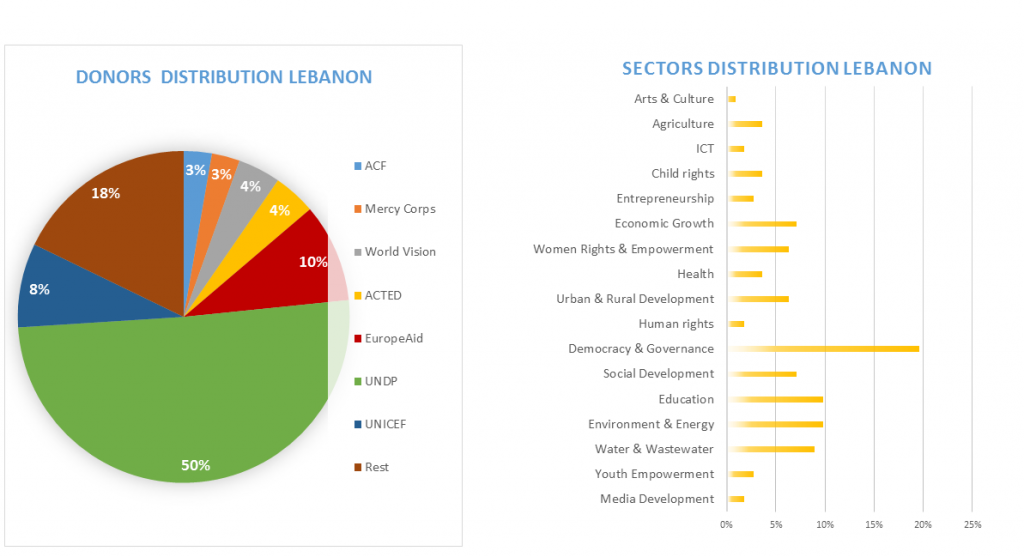 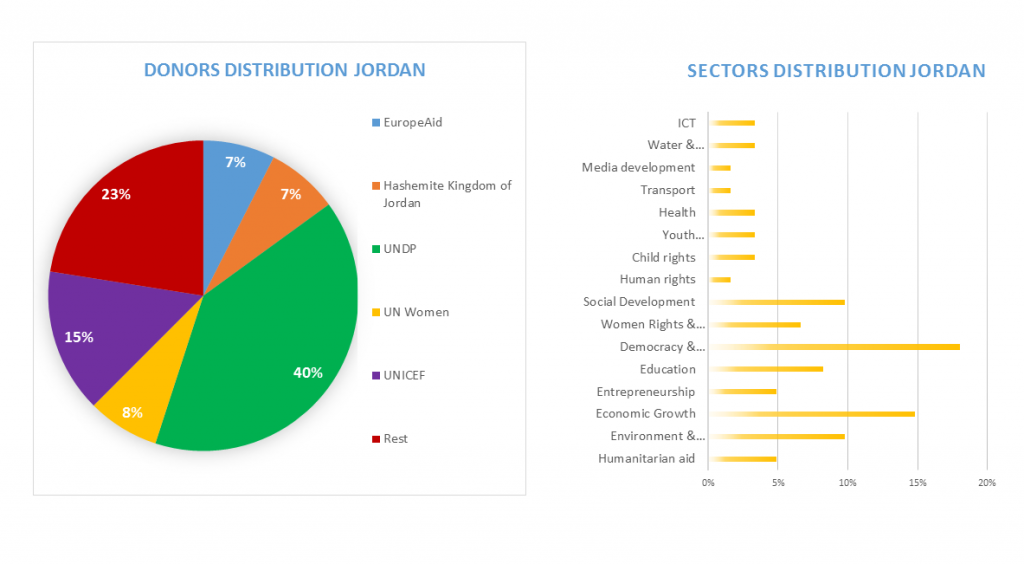 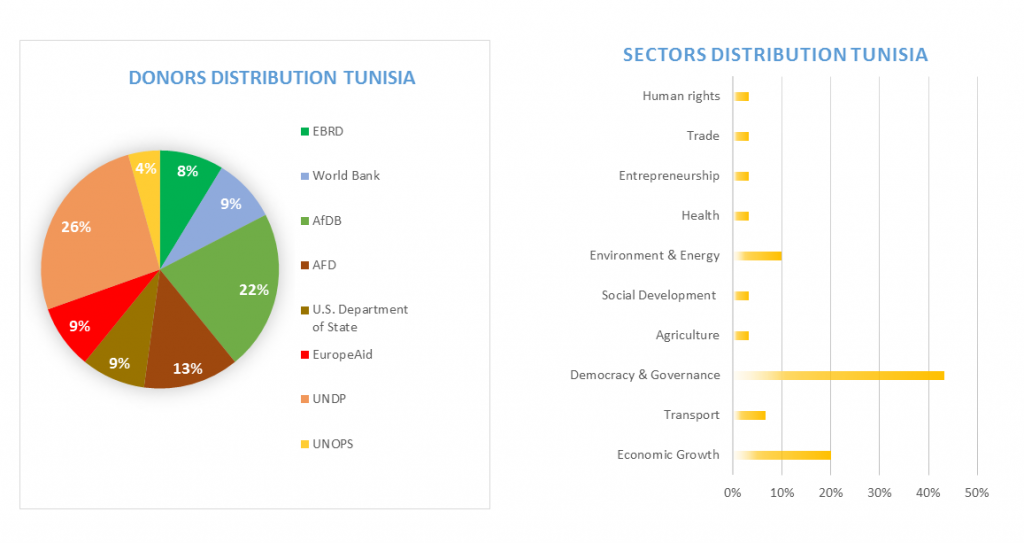 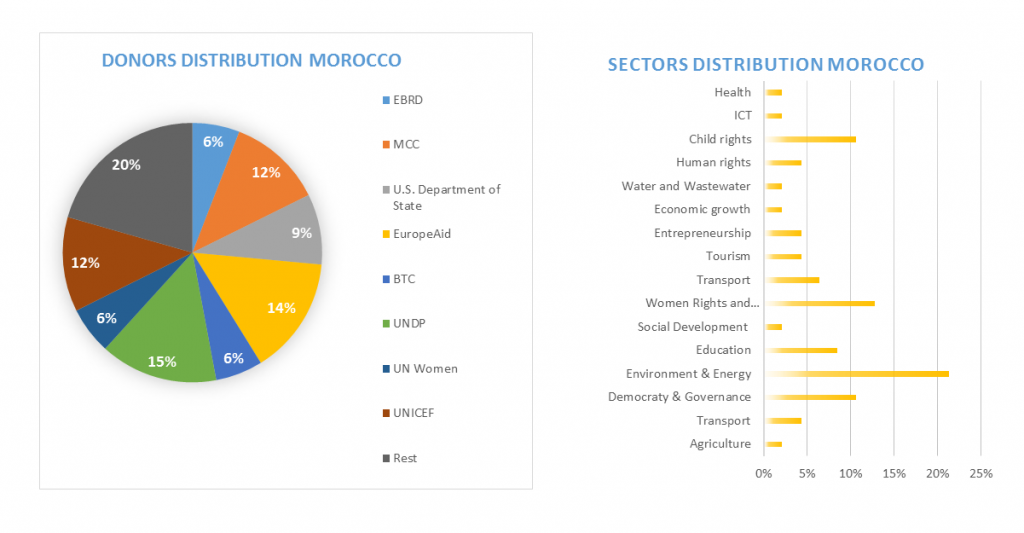 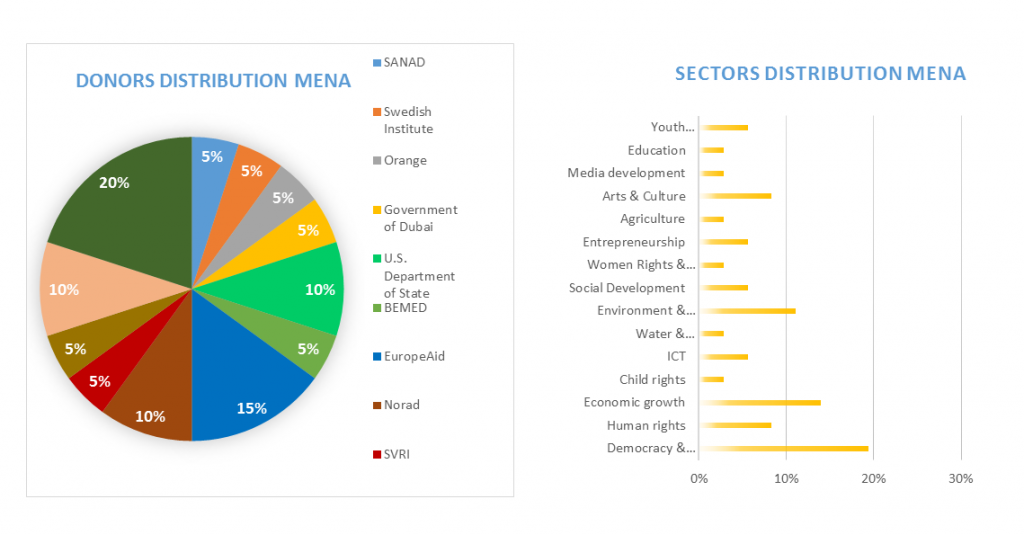 Studying these graphs allows Professional Service Providers to attain a strong, holistic view of the playing field in which donors engage. The day-to-day tracking of opportunities adds emphatical value to businesses, be they consulting firms, engineering and construction companies, media development and marketing groups, or even individual professionals looking to widen their scope of services.

It is important to note at this point that the above data analysis has its own unique limitations including the absence of tenders and grants estimated budgets so that distribution of donors and sectors can be measured not only based on number of procurement notices as we have done in this report but of sectorial distribution that is based on monetary value. In addition, spending trends of donors per country is merely based on the number of procurement notices of tenders and grants.