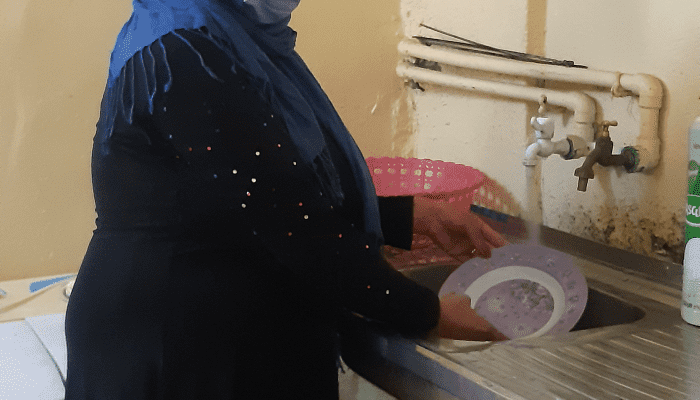 Ismail Faris and his wife Um Medyan smile each time they turn their tap, and a steady stream of clean and cool water rushes out. For many across the globe, this a routine act but to this Iraqi couple, it is simply a miracle, following years of destruction and displacement. Their family is one of over 2,300 households who have benefited from UN-Habitat’s rehabilitation of water, sanitation, and hygiene (WASH) infrastructure through a European Union funded project in Ninewa Governorate.

The area has been deeply affected by the conflict with the so-called Islamic State of Iraq and the Levant (ISIL), and in the Kurdistan Region of Iraq, which hosted internally displaced persons (IDP) who fled Ninewa Governorate following ISIL’s occupation of Mosul and Sinjar cities.

“I am unable to thank UN-Habitat enough.” Ismail said. “First they saved my house, and then they brought potable water after a long deprivation.”

The Faris family experienced the trauma of war, not once, but twice. Ismail himself was hit on both occasions, first by heavy shrapnel, and then by bullets in his arm while fleeing during the Mosul liberation. Tragically, their 10-year old son was killed by a shell that landed in their home. Both the house structure and the water network supplying their street in the Al-Shifaa neighbourhood of West Mosul suffered damage in these conflicts.

The Faris family now has a new start in their old home, with fresh water to help cleanse the vestiges of war, or simply to quench one’s thirst on a hot day.

Their house is one of the 430 in Mosul connected by almost 5,000m of rehabilitated water pipes delivering potable water with high efficiency to beneficiaries affected by the conflicts. The urban recovery initiative is part of the Headway Programme “Strengthening the Long-Term Resilience of Subnational Authorities in Countries Affected by the Syrian and Iraqi Crisis,” funded by the EU and managed by UN-Habitat in partnership with the United Nations Development Programme (UNDP).

Since the outset of the initiative, UN-Habitat has worked closely with the local municipalities and water directorates to identify priority infrastructure, develop the WASH projects, and build local capacity. Beneficiaries like Faris and Medyan were engaged through focus group discussions at the beginning of the projects.

Throughout the year 2020, almost 20,000m of water pipe was rehabilitated in the 5 target cities of Erbil, Duhok, Sumel, Mosul, and Sinjar, and collectively, the WASH projects granted 11,058 people equitable access to a safe and sustainable water supply. With these outputs, the WASH projects directly support the UN’s Sustainable Development Goals (SDGs) by providing access to basic services (SDG 11) and by ensuring equitable access to safe and affordable drinking water (SDG 6).

The benefits go beyond brick and water. As the breadwinner for his household, Faris worried about being able to support his family as they rebuilt both their home and their lives within. He now works part time pouring concrete casting for houses, an opportunity he attributes to the UN.

“If not for the efforts of the UN-Habitat, I would not be able to do anything for my home and family,” he said.

Supporting local economies and providing opportunities to build capacity of beneficiaries formed a key component of UN-Habitat’s rehabilitation work in Iraq. A total of 6,565 working days have been created to date, with locals employed in the design, construction, management, and implementation of the mentioned WASH projects. To ensure the long-term viability of the infrastructure, UN-Habitat targets the training of 25 technical municipal staff on the effective maintenance of water networks. Once completed, WASH projects are handed over to the respective municipalities and water directorates for ongoing management, a smooth transition that will continue sustaining the Faris family and many other beneficiaries.