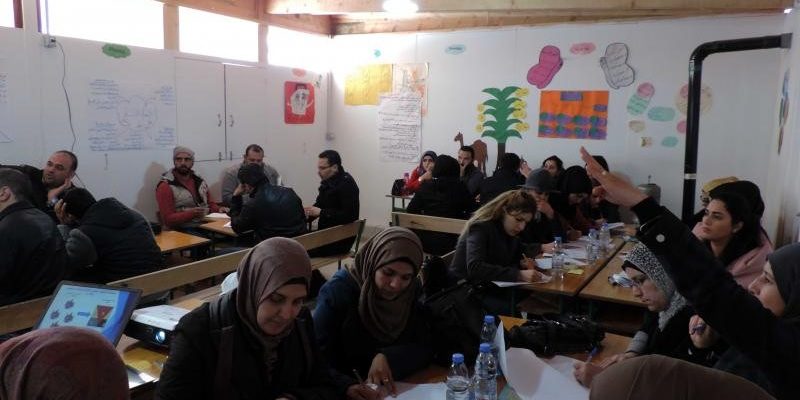 The UK Aid funded Partnership for Digital Learning and Increased Access (PADILEIA) support 8,000 Syrian refugees, Jordanian and Lebanese students with online and face-to-face teaching that provides them with affordable pathways into locally-delivered formal academic qualifications micro-credentials. The digital and technology-enabled learning is a cost-effective way of extending access to education compared to scholarships.

The Partnership for Digital Learning and Increased Access (PADILEIA) is supported by the Strategic Partnerships for Higher Education Innovation and Reform (SPHEIR), an initiative funded by UK Aid through the Department for International Development (DFID) and managed by the British Council, Universities UK International and PricewaterhouseCoopers. This project will put financial clout, in the form of £45 million (US$56 million) in funding, behind attempts to use international partnerships to explore ways to make breakthroughs in raising the reach and quality of higher education.

Compared to other conflict countries, Syria had a relatively high level of access to higher education before the fighting, with a well-funded largely accessible system and around one in four young Syrians having access to post-secondary education. It is estimated that there are around 76,000 refugees aged between 18 and 25 in Lebanon and Jordan who aspire to gain access to higher education, according to UNESCO Institute for Statistics estimates. These future students face significant barriers to higher education access, leading to a lack of transferable skills and future education pathways.

The Partnership for Digital Learning and Increased Access (PADILEIA) aims to produce and deliver blended higher education programmes to Syrian refugees in Jordan and Lebanon, along with members of their host communities.

It aims to support young displaced Syrians to integrate into the local workforce and, in the future, help to rebuild Syria post conflict. But will also provide access to higher education for members of the host countries, as is standard practice with refugee projects.

Technology-enhanced learning environments broadens access to a high-quality educational program, providing a foundation for further higher education and potentially preparing students to contribute to the rebuilding of post-conflict Syria and integration into the workforce more broadly. The project reaches students inside Syria where the project doesn’t actually operate, but borders don’t matter so much when your support is online.

Students will be offered curricula that provide micro-credentials in relevant fields, augmented by student support services and affordable pathways into locally-delivered formal academic qualifications. This is a more cost-effective way of extending access to education than scholarships, particularly in Jordan where fees at universities are high and have caused Syrian refugees to drop out of courses.

More than any other form of education, higher education advances the refugee’s ability to make strategic choices about their lives and provides opportunities for them to contribute not only to solutions to the conflict or crisis they might find themselves in – but also to the relief and recovery of the country they have been displaced from after the conflict has subsided.

Students will increase their knowledge in chosen study areas and digital literacy skills. Students will gain high-level subject-specific knowledge and transferrable skills that they can use at any university or in their professional career. Students will be well prepared to be more qualified for a number of opportunities including

Development leaders are reading this to make sure that they don’t miss out on key insights, analysis, partnership and business opportunities that will put their businesses and organizations ahead.

Register now and get access to all of the content created on DARPE exclusively for business developers and partnership specialists.