Prime Minister Theresa May will announce UK aid to help Jordan transform its economy at the Jordan: Growth and Opportunity conference in London today

Prime Minister Theresa May will today (28 February) set out an increased UK aid package of support to help Jordan’s economy become more self-sufficient at a major international conference in London.

The Prime Minister will use the ‘Jordan: Growth and Opportunity’ conference to call on global leaders and businesses to follow the UK’s lead and invest in Jordan’s future.

The package will be tied to Jordan’s own ambitious plans, with most grants linked to delivery of reform. It will help to stabilise Jordan’s economy and support the country’s promising entrepreneurs as they build small and medium sized businesses.

The UK sees Jordan as a critical partner at the heart of an unstable region and will continue working closely with its key ally in the interest of mutual security, stability and prosperity.

Jordan is a nation which is doing the right thing. It is reforming its economy, investing in its people and in the wake of the conflict in Syria has taken on a huge share of the responsibility of providing a safe haven for millions of refugees. It is a beacon of stability amid the conflict and uncertainty of the Middle East. We must stand by Jordan and support its ambitious plans for economic reform. We will all benefit from the greater stability, security and trade that growth in Jordan will bring. 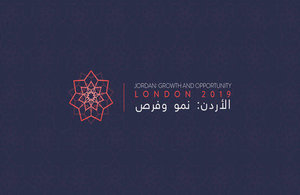 By supporting Jordan’s long-term prosperity, the UK will boost the potential of the country as its future trading partner, support stability in the Middle East and tackle international threats like global terrorism.

Support to Jordan follows the bold new approach set out on the PM’s visit to Cape Town last summer where she announced that international development should be done with the UK’s national interest in mind.

The event in London will champion Jordan as a key partner for international trade, underlining the power of investment to enable countries to move to a future beyond aid.