“My story starts with 20 dinars (US$28) and a can of olive oil,” says 42-year-old Najwa, describing how one simple act of kindness helped her overcome personal tragedy and regain control of her life as a Syrian refugee in Jordan.

From this small initial donation, today Najwa has built up a soap making business that provides her and four other women with a vital income, and which recently began exporting its first orders to China.

Things were very different for Najwa when she and her family fled their hometown of Dara’a in southern Syria in 2013 and first arrived in Zarqa, a sprawling city some 25 kilometres northeast of Jordan’s capital, Amman.

In December 2011, during the early months of a conflict that will mark its eighth anniversary on 15 March, her 16-year-old son Mahmoud was shot and killed in the streets of their hometown. When their home was subsequently destroyed by shelling, Najwa says there was nothing left for them in Syria and they crossed the nearby border into Jordan.

Living in an unfamiliar city and wracked by grief, Najwa was struggling simply to take care of herself and her family, until one day she heard about the Zarqa Life Center, which offers psychosocial support to vulnerable Jordanian and Syria women living in the city. 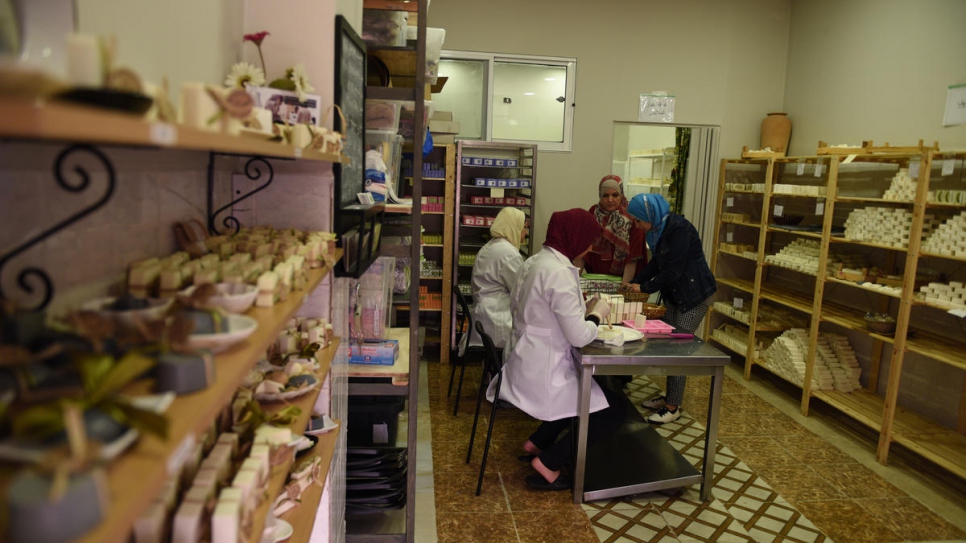 The centre’s director Gertrud Khouri, known as Trudy, is a German-born former nurse who arrived in Jordan decades earlier after applying for a job at a local hospital, before meeting her husband and settling in the country.

After the outbreak of the conflict, Syrian refugees began settling in Zarqa, many of them lone or vulnerable women, and 75-year-old Trudy was determined to help. “I saw that these women needed support. If the women break down then the whole family breaks down,” she explained.

Jordan is currently host to more than 670,000 registered Syrian refugees, more than half of whom are women. In recent years, the Jordanian Government has taken important steps to improve access to the job market for Syrian refugees.

The Ministry of Labour has issued over 120,000 work permits for Syrian refugees between 2016 and 2018, in the construction, agricultural, manufacturing and food and food processing sectors. Additionally, in November 2018, the ministry allowed Syrian refugees in Jordan to establish their own home-based businesses, in food processing, tailoring, and handicrafts.

While UNHCR welcomed these decisions to further empower Syrian refugees to earn a living, livelihood opportunities remain limited for many, especially for women.

Najwa had recently started making glycerin soap when she met Trudy, who saw her potential and encouraged her to try making soap using organic oil from Jordan’s ancient olive groves, gifting her the resources she needed to get started.

Najwa began selling her soap at the centre and at local bazars, eventually expanding to dedicated premises and employing two Syrian and two Jordanian women. She also received funding from a Dutch NGO called ZOA to teach other refugee and local women how to make soap.

“I feel that this is a real achievement and a miracle,” said Najwa, brimming with new-found confidence. “Now we have women who are improving their futures and helping their families, while also developing their personalities.” 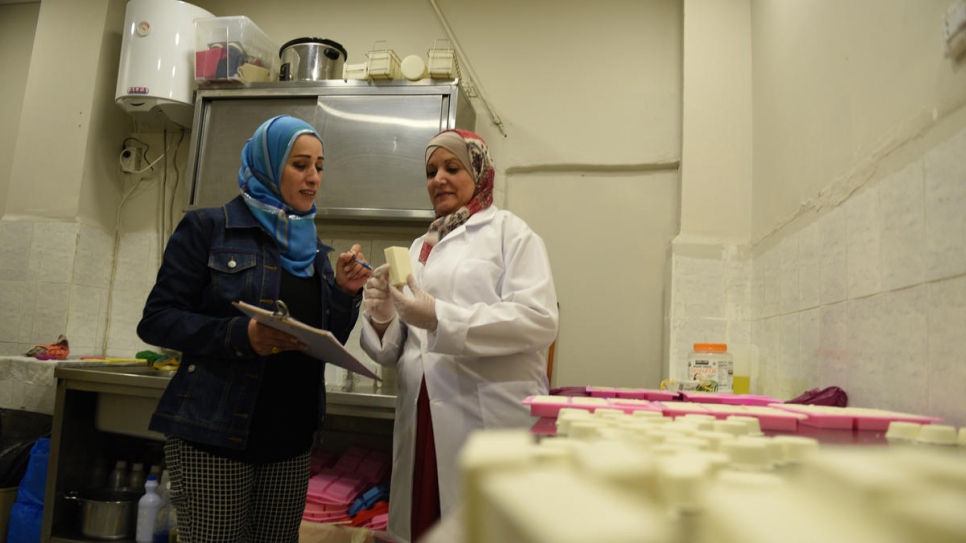 For Najwa, being able to start her own business has increased her economic independence, as well as that of the two Syrian refugees she employs, making them less reliant on aid in the process.

It has also benefited the Jordanian host community by providing employment opportunities for local women, and ensuring that the presence of Najwa and other Syrian refugees like her boosts rather than hinders economic development.

Syrian Refugees are not a heavy burden to hosting communities but they are a great opportunity that boosts local economies through starting their own businesses and generating jobs for themselves and for the citizens of their hosting communities.

Since they first met, Najwa has developed a close relationship with Trudy, who marvels at the transformation she has seen in her Syrian friend. “When I first met Najwa I saw a desperate woman,” she said. “Now I see a very confident person who actually helps other women, not only by teaching them something but also by supporting them emotionally and psychologically.”

For her part, Najwa remains ever grateful to Trudy for showing her kindness and helping her through a tough period in her life. “We met at a difficult time, but she offered me security and love, and a fresh new life,” she said. “I see myself as a strong woman. I passed through hard times, but I was stronger than these difficulties.”