EIB Provides a Grant of EUR 16.3 Million to Support the Implementation of Deir Alla and Al-Karamah Project

The Government of the Hashemite Kingdom of Jordan and the European Investment Bank (EIB) have signed a grant agreement of EUR 16.3 million to support the implementation of the Deir Alla and Al-Karamah project. The project, which received EUR 65 million of EIB financing last February, will improve water supply systems in Deir Alla and Al-Karamah districts in the Jordan valley and involves the construction of a centralised sewage collection and treatment network in Deir Al Alla district. 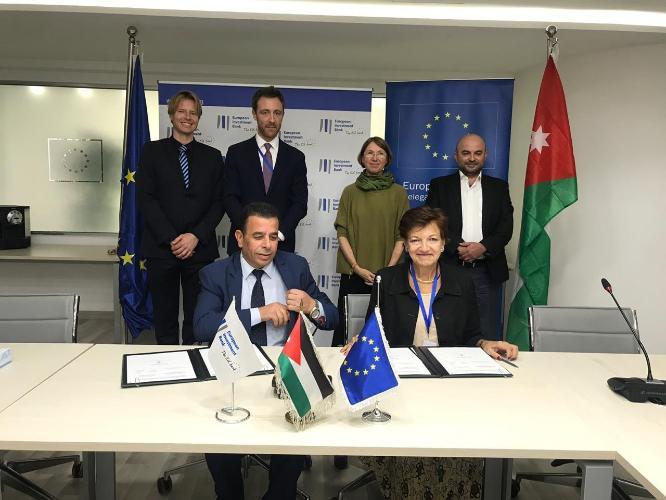 The grant agreement was signed today during a ceremony hosted by the EU Delegation in Amman, by Mrs Flavia Palanza, EIB Director of Operations for Eastern and Southern Neighbourhood, and H.E. Ali Subah, General Secretary of the Ministry of Water and Irrigation.

The grant, which comes under the Economic Resilience Initiative Fund (ERIF) and complements the EIB’s financing of the project, will contribute to improving water supply and sanitation services for more than 85,000 inhabitants in the Jordan Valley area.

“I am pleased to sign this grant agreement with the Jordanian government. We strongly support the government’s plans to improve access to drinking water and sanitation services. The Deir Alla and Al-Karamah project will improve people’s access to these services. We are providing this grant funding to support the implementation of the project thanks to our European donors who contributed to the Economic Resilience Initiative Fund,” commented Flavia Palanza.

His Excellency Eng. Ali Subuh expressed his deep gratitude to EIU for their continuous support to Jordanian water sector that suffers from vast challenges especially after hosting like 1.3 Syrian refugees.

For her part, the EU Ambassador to Jordan, Maria Hadjitheodosiou, said: "The EU is proud to support the water sector in Jordan in a holistic manner, through our bilateral cooperation, regional projects, and direct technical advice in the framework of the Mediterranean Hot Spots Investment Programme (MeHSIP), from which the Deir Alla project has benefited." She added: "The sustainable use of scarce water resources is of utmost importance to a country like Jordan and to the entire region; the Deir Alla project will play an important role in promoting the renewal of water supply networks".

The EIB‘s support to the project will contribute to securing reliable and improved access to drinking water, which is also beneficial for health and agriculture, as well as to economic development and social stability in Jordan.

The preparation and implementation of the “Deir Alla and Al-Karamah project” also reflects the strong cooperation between the EIB, donors and partners. The project has been financed by the External Lending Mandate (ELM) guarantee provided by the EU to the EIB. The feasibility study was prepared with the support of the EU-funded MeHSIP, while the Climate Action in the Middle East and North Africa (CAMENA) initiative provided the grant for the preparation of the feasibility study.