Dawrati, a Lebanese NGO, Tackles the Challenge of Period Poverty in Lebanon - 2022 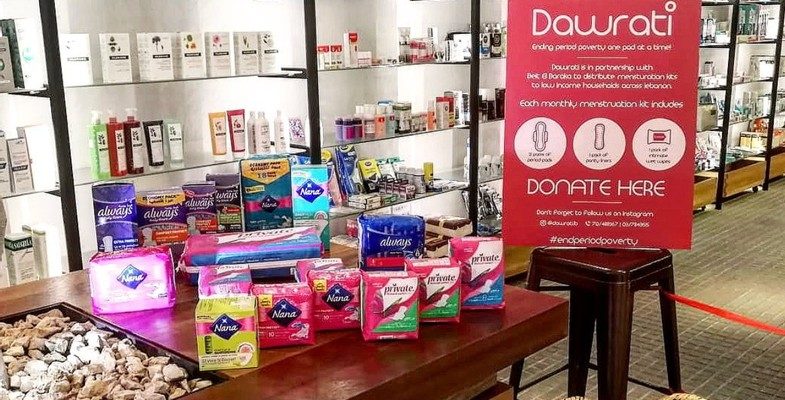 Lebanon’s financial downfall, which began in late 2019, has seen the local currency lose around 90 percent of its value. Fuel bottlenecks, daily 20-hour electricity blackouts, and empty pharmacy shelves have become routine. As of early September, the UN estimates that around three in four of Lebanon’s 6.8 million people are living in poverty, a drastic increase from around 50 percent in 2020. Those who have periods shoulder an extra burden: The price of sanitary pads, whether manufactured locally or imported, has increased by 500%, forcing many women to give up their regular brands, with some seeking out sub-standard alternatives like diapers or rags.

According to a recent study by the Lebanese NGO Fe-Male and the UK-based NGO Plan International: It found that 76 percent of women and girls in Lebanon are now having trouble getting menstrual supplies.

However, as awareness of the issue has grown, a clutch of new products – both from charitable enterprises and sold by local businesses – has been emerging.

Social enterprises like Bdeals which was started by Assia Noureddine and Earthona started by Mayssaa Cheayto began selling reusable pads – made of fabric that needs to be washed before they can be used again.

While these social enterprises have started a necessary trend, the initial investment of 40,000 to 46,000 Lebanese pounds – around $2 to $3 based on the black market exchange rate, or around the same cost as two packs of seven disposable pads – may still be out of reach for many women and girls in Lebanon.

While it has clearly been exacerbated by the recent economic crisis, period poverty has been a reality in Lebanon for some time.

Period poverty is the lack of access to any type of feminine hygiene products, a necessary place used for personal hygiene, menstrual related knowledge and education, and a safe space for women and girls can talk freely about menstration.

Groups like Dawrati sprung up to help, along with shops selling reusable pads.

In May 2020, in the Midst of the financial crisis and at the peak of the COVID outbreak, Line Masri and Rana Haddad launched Dawrati, an NGO, to battle help meet women's menstrual needs. These two women noticed that while aid packages from NGOs began to include facemasks and sanitizers, a few essential items were missing – menstrual products.

Dawrati now offers 3 kinds of services for women and girls:

The Menstruation Kit
The menstruation kit is distributed to girls and women impacted by period poverty. It includes the monthly menstrual products needed and offers period pads as well as pantyliners.
The Maternity Kit
The maternity kit is available to women who have recently given birth, in order to accompany them in their post-partum journey. It includes maternity pads as well as wipes.
First Time Period Kit
This kit is offered to teens and pre-teens in order to equip them prior to their first-period experience. Not only does it include period pads and pantyliners, but also girls-related amenities, all in a beautiful pouch, along with a Q&A leaflet about period and women’s health.

Since its launch, Dawarti has helped more than 5000 women across Lebanon, including Lebanese women, refugees, migrant workers and the LGBT community. 2 million pads were also distributed to women victims of the blast. Numerous campaigns were also launched to normalize the conversation around the period.

Sign In    Join Us
Translate »
Chat with us
Chat with us
Questions, doubts, issues? We're here to help you!
End chat
Connecting...
None of our operators are available at the moment. Please, try again later.
Our operators are busy. Please try again later
Have you got question? Write to us!
This chat session has ended
Was this conversation useful? Vote this chat session. Good Bad